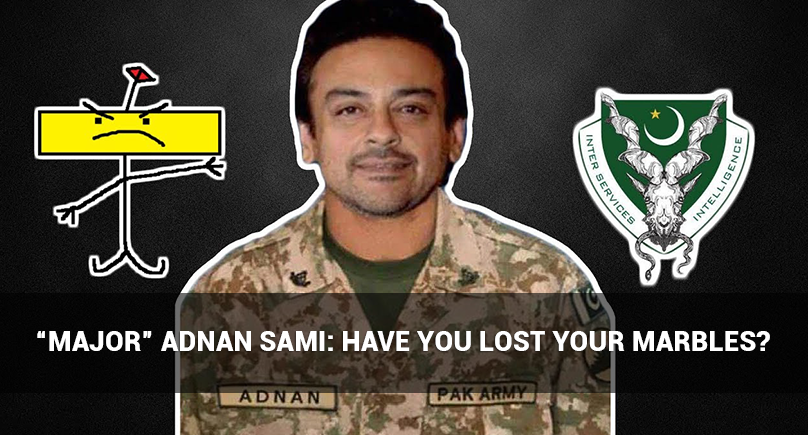 “Major” Adnan Sami: have you lost your marbles?

Adnan Sami Khan, a renowned musician and singer who revoked his Pakistani citizenship to swear allegiance to Pakistan’s nemesis India, has an interesting complaint with the Pakistan Air Force: “The PAF didn’t do that right thing by not inviting my mother, the widow of PAF squadron leader Arshad Sami Khan, for the second year in a row”.

One wonders if someone in their sane mind can have the gall to say as asinine as this. Shouldn’t the “major” in all his senses have realized that in his bizarre grumble he poured out in a letter to the PAF, he would actually end up being a subject of mockery himself? Wouldn’t he have done right by asking anyone in his family or friends if the letter he was going to scrawl was the right move on his part? The major’s action is a textbook example of obstinacy and moral turpitude—and, to a degree, of utter idiocy.

True, Mr Sami’s father was a loyal Pakistani who served in the Pakistan Air force as squadron leader. But the “major” should wait a moment and spare a thought about what he did to his country of birth. Not only did he ditch his Pakistani passport by revoking his nationality, which in itself is a highly abdominal and corrupt act, he chose to, on many occasions, sought to defend it vociferously, sans any compunction or remorse. Sadly, he went a step ahead: as well as vocally defending his act of disloyalty to the country of his birth, he ventilated his rant against it, spitting venom against Pakistan on the Indian media—an act which is both unforgivable and acceptable for a patriotic Pakistani.

Secondly, since the PAF takes utmost care of its veterans and old-age people, it steered clear clear of inviting them to the event due to the ongoing pandemic of COVID-19. Furthermore, for the “major’s” information, it’s important to mention that his mother’s medical expenses are being borne by the PAF and she is enjoying all the perks and benefits on behalf of her husband.

Indeed, Mr Sami’s outlandish complaint has lost on many Pakistanis as well as dispassionate Indians, especially when he holds an Indian passport. His father’s service to the nation and the PAF notwithstanding, Mr Sami was not, by any stretch of imagination, qualified enough to air his grudge against the institution given his past shenanigans and his act of treachery to the state of Pakistan.