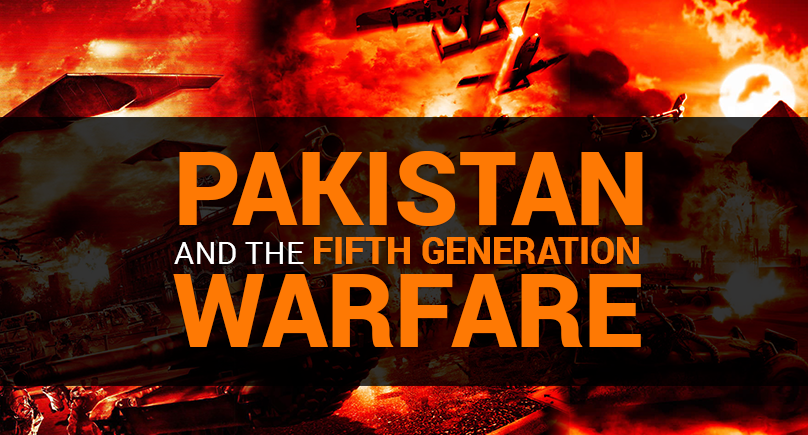 Pakistan And the Fifth Generation Warfare

A practical analysis of Pakistan’s present situation would show that it is under the firm grip of the warfare of the 5th generation. Such elements have suddenly escalated, which have internally occupied the very security of the state and externally strengthened its vulnerability by their undesired acts.

As defined by various security research scholars, warfare of the fifth generation is a new development in the field of conflicts in which non-state actors wage a war against the states.

“Out of sheer frustration without clear political objectives.”

A dominant class of security strategists claim that deprivation and frustration are the primary reasons for Fifth Generation Warfare.

As per the US military, the “enclaves of deprivation” are more likely to be prosecuted. Most Western security analysts agree that Fifth Generation Warfare is neither driven by or ideologically inspired by material objectives. However, it is debatable whether it is really out of these realms.

Deprivation and frustration, indeed, are always exploited by interest groups and vested power centers. In attempt to exhibit their anxiety and lead them to the next level, depressed and deprived classes need dedicated support. Therefore, unlike the western perception of 5GW, there are still strategic and ideological factors behind these. There is currently a drastic change in the form and format of warfare globally. The format of direct war in which massive military power seems to be used from the outset has been revised.

The international competing power bases pave the way for their intervention and imperialism through internal instability, chaos and infighting through 5GW, hybrid warfare and that of non-kinetic warfare. Indeed, as a starting point for their exploitation, a favorable environment is created in the rival states. Much of this is done to prevent international condemnation, UN restrictions and above all, the execution of their agendas in concealed ways.

In Pakistan, the oppressed and frustrated groups have existed since the creation of Pakistan. In the former East Pakistan, the first manipulation of these classes by foreign power centers emerged in the form of unrest that eventually resulted in Pakistan’s disintegration in 1971, with Bangladesh becoming a new state. In the last two decades, Pakistan’s armed forces have waged a long war with a large number of terrorists and insurgent groups and those supporting sub-nationalism with success.

The incredible rate of success against terrorism achieved by Pakistan’s armed forces has on the one hand put this outfit unparalleled among global military outfits and on the other hand, targeted rival centers of power. Through their professionalism and dedication, Pakistan’s armed forces accomplished what the world’s other military units wouldn’t have dreamt of.

In the wake of these unprecedented successes, Pakistan’s armed forces were appreciated by global power centers on the one hand, while developing strategies to steadily and gradually undermine their professionalism and dedication on the other. In a way, Pakistan’s Armed Forces, especially the Pak Army, are the targets of global power centers. All efforts are being focused on creating a misapprehended perception about this institution in the eyes of general masses and the intellectuals of Pakistan.

For the first time in Pakistan’s history, the extension of the Chief of the Army was a subject wherein Pakistan’s Supreme Court had to intervene. This entire move was a well-orchestrated strategy by those who, although being part of the Imran Khan Government, complicated the process. It was an indirect attack on an army institution, requiring a thorough probe. Therefore, since military seems to be the only institution that binds Pakistani nation together, weakening this institution means increasing Pakistan’s vulnerability in front of its rival forces, which they waited for decades.

Another area, the Student Solidarity Campaign, is contributing to domestic strife and instability. One aspect is the restoration of student unions; the on-going student solidarity campaign, however is a step in a different direction. For their vested interest, some of the national and religious organizations alongside the media groups are behind this campaign.

If student unions were restored, it would let the students associated with the unions get an academic orientation, rather than using these outfits and the unions for political activities and other undesired acts. In addition, let us not misdirect Pakistan’s youth from their basic orientation; the academic pursuit of greater goals of research, innovation, development and progress.

Rather than using them as a weapon for political and religious forces, some of which could have their external links, students and student unions must be made a platform for their development and for the development of Pakistan. This is the most vulnerable area; on a war footing, the government must pay heed. Student inequality and the insecurity of deprived groups and communities must be resolved before they are exploited to become weapons of unwanted domestic and global centers of power.

Through the use of a combination of 5th generation warfare, hybrid warfare and non-kinetic warfare, Pakistan has been internally weakened by competing power centers. Any internal instability will pave the way for intrusion into the state’s affairs from outside. Therefore, let’s devise strategies to combat these sinister forms of warfare by rival power centers against Pakistan’s state and society.