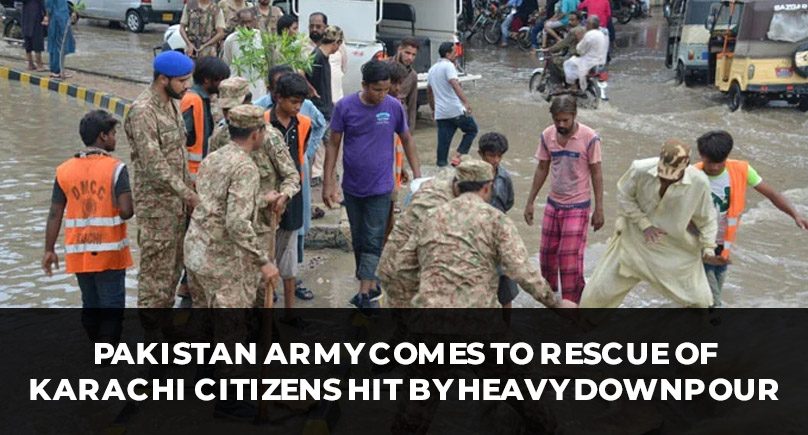 TUESDAY’S torrential downpour in the metropolis unleashed unprecedented havoc upon the helpless and unfortunate citizens of Karachi. People coming from work were seen stranded in knee-deep rainwater, cars submerged in what looked like flood, and vehicles damaged by a rare landsliding incident. Worse, rainwater mixed with sludge and filth entered people’s homes, forcing them to migrate to other safer areas. There was complete chaos all around, in fact a doomsday scenario, but there was no administration, no government in sight in the hour of extraordinary hardship and adversity for the residents of the orphan metropolis.

However, amid such pandemonium and bedlam, there was, like always, only one institution at work: the Pakistan army. The soldiers of the army were seen helping the citizens with relief and rescue efforts after torrential rains left residents of several low-lying areas aground and without help.

According to the Inter-Services Public Relations (ISPR), “Army Engineers’ machinery including heavy plant effort is in progress to stop water flow from Malir Naddi by refilling the breached area.”

The army’s media wing added that more than 200 families have been stranded on rooftops due to heavy flooding in Malir Naddi, Kohi Goth and Dur Muhammad Goth.

“Cooked meal being provided to affected population struck due to heavy rains. Due to heavy water current at the moment, Army helicopters will be flown to rescue these families after weather clearance,” it added.

On Tuesday, army chief Qamar Javed Bajwa had directed the military troops to set up relief operations in Karachi to assist the people hit by heavy rains.

“Troops must reach out to affected population in distress and extend all necessary care”, the army chief had said.

The Met Office on Tuesday confirmed that the 90-year record of the monsoon rain was broken after yesterday’s rainfall in Karachi in August this year.