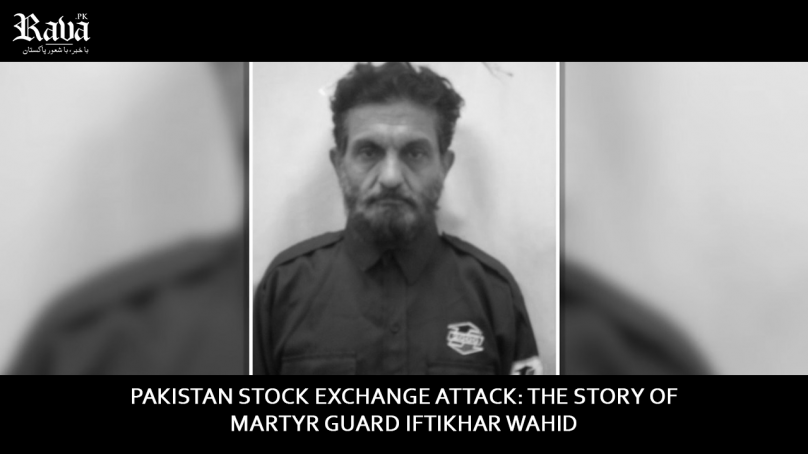 Monday is the first day of trading in the stock market and all traders look at the stock exchange.

But the last Monday in June began with the horrific news not only for business circles but for the whole of Pakistan. Pakistan Stock Exchange had encountered a terrorist attack but was foiled by private security guards and the bravery of the Karachi police.

At 10 am on Monday, June 29, terrorists tried to target the Pakistan Stock Exchange in Quaid-e-Azam city. And proved that as long as the pride of this nation is alive, no conspiracy can succeed against this holy land. The sacrifices of these two security guards along with the police youth in repelling this attack by these terrorists should be appreciated.

Because with his blood he once again wrote the story of loyalty to the homeland which will be remembered in the history of the nation as an example of bravery. To remember these heroes of the nation, the Rawa News team reached the house of Shaheed Iftikhar Ahmed, a security guard who was martyred in the attack.

Passing through the unpaved narrow streets of Railway Colony, we reached Pous No. D-46 without any end.

When he entered the house to tell the story, he realized how the residents of this place must be struggling to earn a living.

Arriving on the first floor through a half-sloping staircase, it was discovered that a small room was the whole universe of Shaheed Guard Iftikhar Wahid where he lived with his five children.

He used to stand at the door of the security exchange and earn halal food for his family.

One of the five children of martyr guard Iftikhar Ahmed is unfortunately disabled, while his 18-year-old son also has a heart condition.

One daughter is married while the other daughter is pursuing a master’s degree and the youngest is studying in class VII.

Daughter Neelam said that her father was a very noble and good man, he worked hard, his life was a job and a home.

On Monday, however, he left before his time and we could not even say goodbye to him

Shaheed Guard’s niece Iram said that his uncle was a very noble but brave man and he loved his homeland very much and we are all proud of his martyrdom.

However, the authorities are requested to make arrangements for the bereaved on a permanent basis

On the other hand, according to our sources, the families of the martyred guards have been given checks by Malik Riaz and JDC.

While announcements have also been made by the Sindh government and other philanthropists.

Team Rawa greets all these martyrs who fought relentlessly against terrorists and hopes that Arbab Ikhtiar will fulfill his promises.