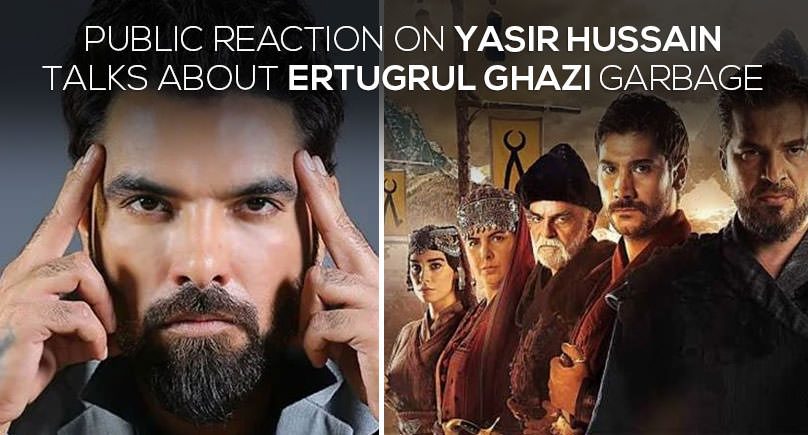 Almost every Pakistani, of every age, has heard or watched Ertugrul Ghazi and has nothing but love and respect for the Turkish stars who acted the characters. Amidst the masses who love the drama, there are a few Pakistanis who are envious to it. Indeed, Pakistani dramas have a huge fan following both within and outside the country, but the Turkish drama has become a rage among a diverse body of audience.

Yasir Hussain is the talk of most media channels today – and it could be his quickest way to become popular – but attacking Ertugrul Ghazi (Turkish Television Show) and calling the actors “Garbage” was a very low thing to do. In fact, Yasir Hussain has no chance against the level of fame and respect the actors of this Turkish drama have achieved in the Pakistani public’s eye.

Also Read: 5 Pakistani Dramas That Inspired Us in Real Life

The Pakistani public as well as artists have reacted harshly to Yasir Husain’s outburst; popular Pakistani VJ Anoushay Ashraf responded to Yasir’s comment in these words:

“Let’s just gently remind Yasir that no one is Kachra (garbage) for one. And even if their work isn’t at par to his liking, actors from around the world must be respected,” she said.

In addition, a YouTube video has laid bare the true face of Yasir Hussain, explaining his stature in the Pakistani media industry.

It seems that Yasir Hussain is upset about being a huge failure and not getting enough fame the right way, hence his irritation at Ertugrul Ghazi’s epic popularity. Sadly, it does seem to have worked, as he is the most-talked celebrity right now, clearly for all the wrong reasons.

Worse, it will tarnish his image for a very long time, because his negative marketing gimmick seems to have backfired on him.

10 Best Hotels for Stay in Karachi