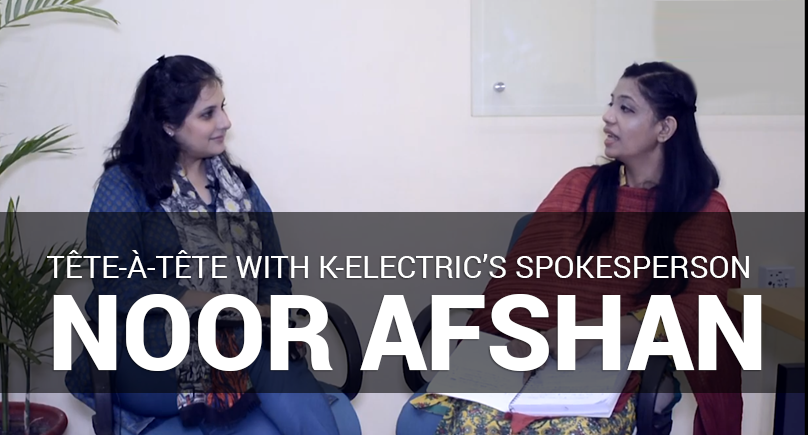 WITH power theft, kunda system, loadshedding, and overbilling, K-Electric has been plagued by a number of issues for decades. But the company appears reluctant to make a concerted effort to resolve these issues once and for all, prompting many to call it a mafia. But is K-electric really a mafia?

To find an answer to this key question, Rava’s editor Famidah Yousfi had a conversation with KE’s spokesperson Noor Afshan. Here are the excepts.

F: First of all, tell me why people have no faith in you?

N: K-Electric is a very old institution that was established way back in 1913. The new management took over barely 10 years ago, following KE’s privatization. In that respect, we are still a young organization and we need time to grow and develop. Here, it’s important to learn one thing: prior to the arrival of the new management, only 30% of Karachi’s neighborhoods was exempted from loadshedding, but as soon as we took over, almost 70% of Karachi got exemption from loadshedding. Moreover, there had been no investment in K-Electric for years while the ratio of supply and demand had also increased. Power outages would occur for hours on end, and I remember if we ever called the KE to lodge a complaint, no one would respond; today, however, we have our own app, an SMS service, over 30 customer centerswhere our customers consumers can contact us in many different ways. Instead of censuring us for the ills that have plagued the company for decades, you should tell us how we can further improve our services. Criticism for the sake of criticism will not do.

When the lockdown started in Karachi a couple of months ago, we did not resort to any loadshedding in any area of the city. Even those neighborhoods where a whopping 80% of electricity would be pilfered were exempted from loadshedding. Now, we are confronted with a difficult situation, because we also have to manage things. We only need a little bit of support from the people, so that we could extricate ourselves from this trying time. At the moment, we have a temporary problem of supply and demand, but this too will be resolved.

F: Karachi has a power demand of 3,600 megawatts, while you are providing only 3,200 MW. Why didn’t you raise your capacity in the last 10 years?

N: When we came, there was a huge shortfall of supply and demand. We invested nearly 2.4 billion dollars, which helped us add as much as 1,000 MW to the system. We also added 3 new plants so that we could increase our power generation capacity. Due to these measures, Karachi was had been in surplus position for the last few years, while load management had ended and industries were also being provided 100% electricity. Power planning takes time; we cannot install any plant or transmission network in isolation. Any power project may take up to three years to materialize and the approval from the federation is also required. In June 2020, we were told we could not raise the plant of 700 megawatts. We are unable to do anything if we continue to face approval issues. If our power plant had been approved on time, we wouldn’t have been facing these issues today.

We have now made our own projects; one power plant of 900 MW is in process, which will be functional in 2021, and the situation will be much better ahead of the next summer. And we are also about to get 2,100 megawatts from the national grid, and, hopefully, in the next one to three years Karachi’s power shortfall will turn to power surplus. We also have robust investment plans and we are heading in the right direction.

F: But no one, be it the general public, the government or the opposition, trusts you, with everyone resorting to protest against you. Sometimes the protest and demonstrations are so severe that even the main thoroughfares like Sharah-e-Faisal get blocked. How do you see this situation?

N: Ours is a power-selling company. And the assumption that we shut down electricity deliberately defies logic, because if we do that, we will be the ultimate loser. However, some things are within our control and some aren’t; what we can do is that we can ensure our availability to our customers, remove the faults, and remain functional. If we get timely approvals, then our work will become much easier.

F: As you know, after the rain, electric cables fall on the ground which leads to electrocution and deaths. What about your plan of rectifying the entire city’s cable system?

N: Look, our safety protocols often get flouted when people put up internet, cable wires and street lights on our poles. Besides, the “kunda” wires exacerbate the situation. Naturally, following the rain, the hodgepodge of wires becomes hazardous but we often, through our media campaigns, urge people to stay away from electric poles and wires. Often, we also resort to power outage deliberately, in order to avoid electrocution. However, overall, it’s a societal issue and people should be sensitized about not pilfering electricity or using electric polls for other wires.

F: What about the K-Electric overbilling issue? What have you done to fix this serious problem?

N: The word “overbilling” has become pretty common,and a dilemma for us. The electric bill comprises two components: electricity rate and electricity unit. The electricity rate, which should be uniform across the country, is set by Nepra. As for the electric unit, your meter reading tells everything about how much electricity you have consumed. The cumulative of the rate and unit, as well as some taxes, makes up the electricity bill, so technically there should be no K-Electric overbilling issues. However, if some omissions have occurred here and there, we are trying to fix them. Our 30 customer care centers, Nepra’s regional office, and the office of the federal ombudsman