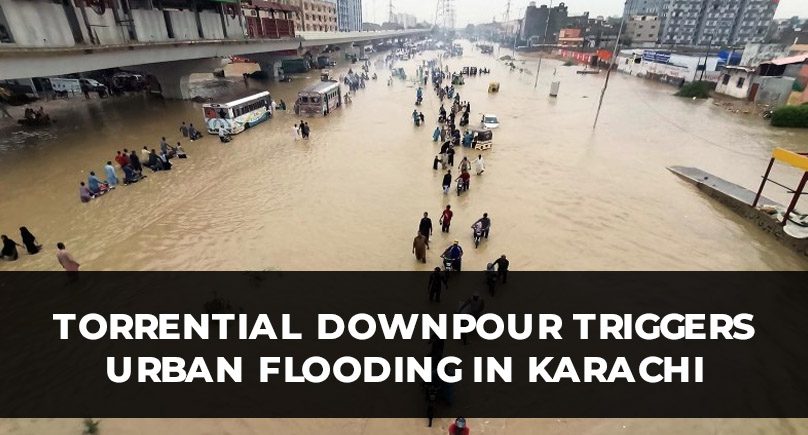 MET Department’s prediction about urban flooding in Karachi proved right when major parts of the metropolis were inundated by rainwater as heavy downpour lashed the city on Tuesday, making lives increasingly miserable for the commuters and residents.

Residents in Azizabad griped that the sewerage lines were already broken in the area, which were exacerbated by torrential rain. In Gulistan-e-Jauhar Block III, heavy rain triggered landsliding, which led to a number of cars being brutally dented in the parking of a residential building.

The city’s Surjani Town area has so far been the worst hit, where approximately 80% of the residents were forced to move to safer neighborhoods as water entered their homes. Left to their own devices, the dwellers of the forsaken Surjani Town made boats out of drums and wooden planks in order to navigate their way through the rainwater mixed with sewerage.

According to authorities, Gulshan-e-Hadeed received 105 mm of rainfall over the last 24 hours while Landhi received 45mm of rain.

Pakistan Meteorological Department said that heavy rainfall will continue in Karachi till Thursday.

What Atiqa Odho said on her acquittal from liquor case