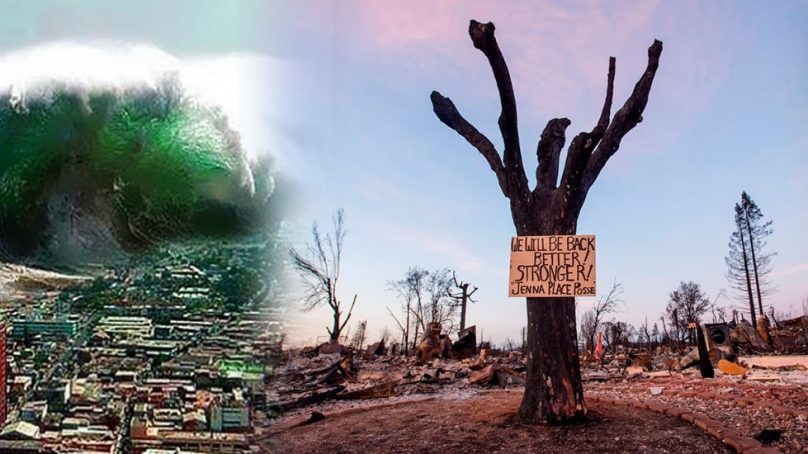 2018 is officially the year of Natural Disasters (Rava Special Report)

Natural disasters around the world are occurring at an alarming rate in 2018. Every few weeks, we’re witnessing earthquakes that demolish whole cities, wildfires that burn thousands of acres, and cyclones that cause mass flooding and property damage. In the wake of these disasters, people grieve the losses of loved ones and destroyed property while anticipating the long road back to personal and communal recovery.

Whether they’re raging wild fires, deluges of violent rain, or forceful movements in the earth’s crusts, the impact of natural disasters is merciless and immeasurable. High death tolls and property damage leave civilians devastated. And it’s not only families and cities who suffer in the aftermath. The scope of these events inevitably causes political, social, and economic turmoil, amplifying the tragedy and creating a vulnerable climate.

This year is shaping up to be a pretty shaky month, thanks to several large earthquakes across the globe. These earthquakes have spurred reports that California is more likely to experience a catastrophic earthquake, colloquially known as “the big one,” very soon. But experts say that’s not how earthquakes work.

In the past three weeks, there have been eight earthquakes that were magnitude 6.5 or greater. That’s 40 percent of the major quakes that have happened so far this year, according to the U.S. Geological Survey (USGS). Yesterday morning (Aug. 22), a magnitude-6.2 earthquake occurred about 170 miles (273 kilometers) off the coast of Oregon, along the Blanco Fractal Zone (separate from the San Andreas Fault in California), USGS reported.

But don’t worry — the occurrence of these earthquakes doesn’t suggest that there’s a higher chance now, compared with any other time, that California will experience a major earthquake.

“I have not heard of any seismologists who fear that California is about to experience ‘the big one,'” said Jascha Polet, a seismologist at California State Polytechnic University, Pomona. “In the past few days, there have been more large earthquakes (globally) than on average, but that will happen in any random distribution,” Polet told Live Science in an email.

Seven of this month’s eight monster shakers occurred around the Ring of Fire, or the Circum-Pacific Belt. This region is the horseshoe-shaped border of the Pacific Ocean where about 90 percent of the world’s earthquakes occur, according to the USGS. California is included on the eastern side of the ring, and so far, the state has been spared significant earthquake activity in the past few months. In the past 30 days, the largest quake was a magnitude 4.5, which occurred July 25, 65 miles (105 km) off the coast of northern California.

Although there are regions, such as the Ring of Fire that are more prone to seismic activity than others, earthquakes are discrete events that occur randomly and independently of one another over time. The recent increase in seismic activity after an apparent lull is exactly what seismologists expect. “In a random distribution, there will be periods of low and high activity,” Polet said.

Major earthquakes can shift the underlying stress on that particular fault, which, in turn, may change the likelihood of later quakes in the area around the fault. For instance, large earthquakes typically result in aftershocks, or smaller earthquakes in the same area of the main earthquake. “These aftershocks will decrease in size and frequency as time goes by and the fault settles in,” said Kasey Aderhold, a seismologist with the Incorporated Research Institutions for Seismology, a nonprofit research organization. “The larger the earthquake, the longer it takes to settle back down to the usual background seismic activity,” she said. Aderhold also explained that the largest earthquakes, like the magnitude-9.1 Tohoku earthquake off the coast of Japan will have aftershocks for years to come.

California has a history of experiencing large earthquakes, such as the magnitude-7.8 earthquake that rocked San Francisco in 1906 and the magnitude-6.9 Loma Prieta earthquake in 1989 that caused 63 deaths and thousands of injuries, according to the USGS. Because many years have passed without a major California quake, some news outlets have speculated that the chance of a devastating quake occurring in California is higher now, considering the recent increase in earthquake events around the Ring of Fire.

“We have had other large earthquakes that did not trigger the ‘big one,'” Aderhold told Live Science in an email. For example, she said, “the 2004 [magnitude] 9.2 Sumatra earthquake made everywhere on Earth move by at least 1 centimeter [0.4 inches],” but there was no West Coast “big one.” Aderhold also pointed to the 2011 magnitude-9.1 Tohoku earthquake off the coast of Japan and the 2017 magnitude-8.2 Chiapas, Mexico, earthquake, neither of which spurred a large earthquake in California.

Cause: low atmospheric pressure created the Category 4 hurricane, which made landfall on October 10 with winds up to 155 mph

Damages: the hurricane caused immediate flooding and severe damage along the shore. The winds and floods aren’t just threatening Florida either – southern Alabama and Georgia residents were also warned about the potential damage from the storm.

The Indonesia Earthquake And Tsunami

Cause: Shifting tectonic plates triggered the 7.5 magnitude earthquake, and the quake set off the tsunami, which detector buoys did not catch.

Damages: Roughly 2.4 million people were impacted by the pair of natural disasters. As emergency officials worked and waited for supplies, displaced citizens resorted to looting to gather necessities. Officials worked to rescue people still alive and buried under the rubble of collapsed buildings. The quake cut off power supplies, which is why many people did not receive a warning about the incoming tsunami, which had waves up to 10 feet high.

More than 1,000 inmates from five prisons escaped after the natural disasters, and authorities are asking they return within the week.

Cause: The hurricane was caused by naturally occurring weather patterns

Damages: Within 24 hours of landfall, the massive hurricane flooded homes and streets in North Carolina, prompting evacuations. The Category 1 hurricane slowed to 2-3 mph, which means the Carolinas suffered a 24-hour cycle of torrential rain and hurricane winds up to 90 mph. Up to 40 inches of rain flooded areas of the Carolinas. Over 620,000 people lost power in North and South Carolina. On Monday, September 17, the storm was downgraded to a tropical depression, but it still had winds up to 30 mph. Several rivers, including Cape Fear, Little, Neuse, and Rocky Rivers, hit major flood stage in only two days.

A week after the hurricane, major highways remained flooded and closed. A damn at the LV Sutton Power Station failed, and officials are worried that the 400,000 cubic yards of coal ash – which contains toxic substances like mercury, arsenic, and lead – could contaminate nearby Cape Fear River.

Damages: The typhoon caused massive flooding and power loss throughout Guam and Marshall. Residents of the Philippines started evacuating on September 14 in anticipation of the Category 5 hurricane. On September 16, the typhoon made landfall in Guangdong, China, killing four people. Winds reached up to 107 mph and prompted emergency officials to evacuate more than three million people. Hundreds of houses went powerless, and extensive flooding plagued coastal areas. In the Phillipines, 54 people were confirmed dead from the storms, and even more were reported missing.

The After-Effects Of Tropical Storm Lane

Cause: Tropical Storm Lane, which started as a hurricane but was later downgraded.

Damages: after five days, over 51 inches of torrential rain hit the Big Island. This island was hit hardest, and families were forced to evacuate to dodge mudslides and other collateral damage. Dozens of people needed to be rescued from heavily-flooded areas. The downpour washed out streets, damaged homes, and sparked wildfires. The heavy rainfall also combined with lava from the rift zone created steamy white-out conditions.

Even though Tropical Storm Lane has passed, Hawaii is not in the clear yet. Tropical Storm Miriam may turn into a hurricane, and as of August 27, officials say the storm could increase in intensity and present more problems for the islands.

Cause: Record-high temperatures combined with dry vegetation led to 17 active fires across the Golden State. The Carr fire is the most ruinous of the wildfires, and experts say it’s the seventh most destructive fire in California history–and it’s still growing. Firefighters from 16 states joined the containment efforts, making the total amount of firefighting personnel 12,000.

Damages: Over 103,000 acres of land burned at and around Redding. The Ferguson Fire scorched 57,846 acres. In addition, the Mendocino Complex Fire has already burned tens of thousands of acres, but an exact calculation has not been made. Experts estimate fires destroyed 300,000 total acres across the state.

The Carr Fire destroyed 657 homes in and around Redding. The Mendocino Complex Fire burned down six homes. Officials shut down the southern section of Yosemite Park due to the Ferguson Fire.

Deaths: 6 from Carr Fire; 2 in the Ferguson Fire.

Japanese government says at least 100 people have died or are presumed dead from heavy rains, flooding and mudslides in western Japan. https://t.co/TtB6pP4jOr pic.twitter.com/a2kGwXfnbb

Cause: During the first week of July 2018, heavy rains in southwestern Japan led to devastating floods and mudslides. The region reportedly experienced three times the amount of normal rain for all of July in a matter of days.

Damages: The torrential downpours caused flooding and mudslides, which destroyed buildings, caked the land with mud, and left thousands stranded and displaced. Some residents remained trapped in their cars, caught off-guard by the fast pace of the mudslides. Roughly two million people had to abandon their homes and retreat to safety. Over 70,000 emergency response workers are out helping people trapped.

When is the right time to send your child to school?