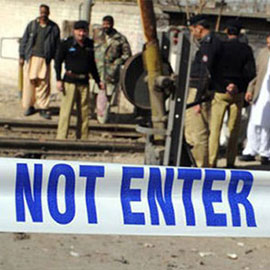 A roadside blast targeted a police van in Peshawar. DSP was travelling in the van targeted. DSP and policemen remained safe in a blast in Chamkani area on Friday.

The DSP’s vehicle suffered minor damage in the blast.

A second remote-controlled bomb exploded in Peshawar’s Karkhano Market earlier in the day moments after a police vehicle pass nearby. No loss of life was reported in this blast however, a passenger bus was partially damaged.

An official of the Bomb Disposal Unit said around six kilogrammes of explosives packed in a pipe were planted at the roadside and detonated through a remote-controlled device.

Last month, three Frontier Constabulary (FC) officials were killed and seven others were injured in a roadside improvised explosive device (IED) blast which occurred near their vehicle in Peshawar’s Bashirabad area.

The number of attacks in the country has fallen around 70 per cent, due to a combination of the military offensive against Taliban bases along the Afghan border and government initiatives to tackle militancy, but attacks on security and civilian targets continue to occur occasionally.