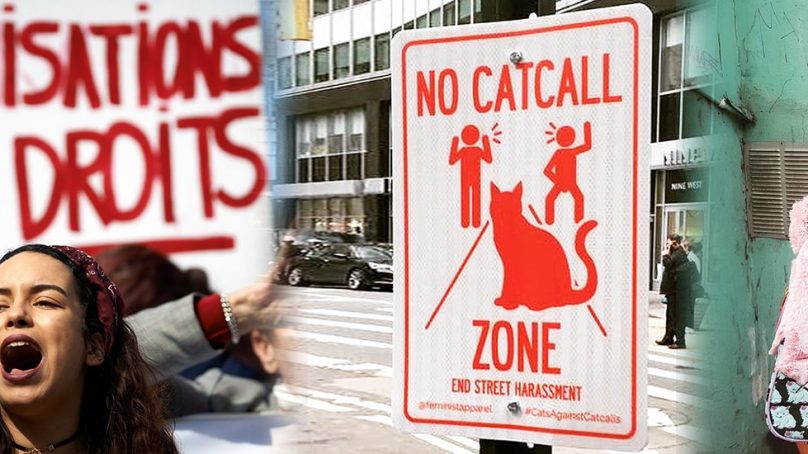 Awareness of sexual harassment in various forms continues to increase. However, literature on street harassment, such as catcalling, is less explored.

The police may largely ignore harassment on the street because men often do not understand how pervasive it can be, but most importantly because there are no laws being violated in such encounters. About two thirds of women report that they hear such comments every day, but men’s estimates of the frequency of such remarks is significantly lower.

Most people might assume that harassment starts when you’re a teenager, but the truth is it often starts when you’re a child. As children–especially as girls–we’re often taught to not talk back, especially to people who are older than us (and our first harassers usually are). We’re socialized to stay quiet and polite, even in situations where we’re incredibly uncomfortable.

When a woman complains about catcalling or one of the many other forms of harassment she most likely deals with, she is often met with the same old rebuttals from men (and sometimes even women). “Why didn’t you just say you weren’t interested?” “Just ignore it.” “It’s a compliment.”

The shameful treatment of women in our culture is not just limited to jeers and catcalls on the street. But we need to be careful about aggressively using disorderly conduct or similar laws — like those that bar “obscene” statements or gestures in public — to criminalize unwelcome verbal interactions.

What exactly is a compliment?

Normally, I roll my eyes at the people who cite dictionary definitions in conversations about social justice issues. In this case, however, it might be useful to refer to one. According to Oxford, a compliment is both “a polite expression of praise or admiration” and “an act or circumstance that implies praise or respect” (emphasis added).

It’s true that some women feel flattered by unwarranted comments from men, and positive reactions are perfectly valid and acceptable. But according to studies done on the emotional responses to street harassment, these women are the minority. The majority of women do not find instances of sexual harassment to be polite or respectful. In fact, we often find them terrifying.

First, it’s crucial to note that all states already have laws governing many forms of street harassment, including some of the behavior on display in the video. Laws covering following, threats, stalking, groping and putting someone in fear of unwanted physical contact (even if you don’t touch them) should be enforced, especially in cases involving physical contact like this one.

Disorderly conduct and “obscene gesture” laws, however, pose special problems for the First Amendment. They can be (and often are) misused against lawful protesters, people criticizing the police and individuals filming officers in public. Extending disorderly conduct laws to unwanted verbal interactions would amplify the potential for misuse in these and other areas.

Harassment is more than just rudeness

Despite all of the stories women share about their experiences with harassment, a number of men still seem completely convinced that we love it and want it. Believe us when we tell you: most of us don’t. If we don’t find what you’re saying or doing flattering, it is not a compliment. It’s as simple as that.

Street harassment evokes our vulnerability as women. It reminds us of the assault and violence that could happen ― and does frequently happen ― at the hands of abusive men.

The onus is still on women to protect ourselves or to ignore unsolicited comments, rather than on men to change their behavior. And this is what motivates me to keep answering back. I want men to change.

Sexual harassment of any kind ― from being called out on the street to physical assault ― has always been a dangerous part of our society. The aftermath of the Weinstein revelations, #MeToo and other campaigns suggest there’s a growing intolerance for this abuse. And until we get there, I’ll continue with my personal battle against catcalling.

Moreover, I’d personally propose a law that would prohibit street harassment and would also be consistent with our First Amendment jurisprudence about other kinds of hate speech (cross-burning in Virginia vs. Black) that intimidates, harasses and perpetuates inequality. It would allow states and cities to recognize street harassment for what it is: physical and psychological acts that intimidate, exclude, subordinate and reinforce male dominance over women.

Note: This article has originally been written by Urooj Fatima

Redefining Saudi-Pak ties: A historic moment for Pakistan as agreements get inked