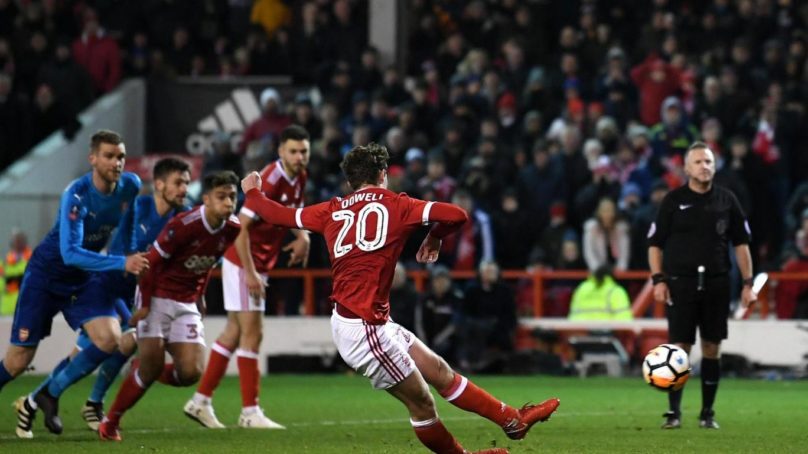 Arsenal knocked out of FA Cup by Nottingham Forest

LONDON:  FA Cup holders Arsenal were sensationally dumped out of the competition by Nottingham Forest on Sunday, joining Leeds United as big-name casualties on a day of shocks.

Elsewhere, West Ham stayed alive with a goalless draw at Shrewsbury and Tottenham scored three goals in eight second-half minutes to see off the challenge of League One side AFC Wimbledon.

Championship side Forest revived memories of their glory years under Brian Clough, putting 13-times winners Arsenal to the sword in an incident-packed 4-2 win at the City Ground.

Arsenal boss Arsene Wenger, who made nine changes to the side that drew with Chelsea in the Premier League in midweek, defended his team selection for the third-round tie.

“We have many players on the edge and we play again on Wednesday,” he said. “When you don’t win the selection is always questioned. I believe we had an experienced team — eight or nine internationals. It would be easy to think that was the problem. When you’re against a team like that they’re very difficult to beat. Defensively you cannot afford the mistakes we made.”

Nottingham Forest’s caretaker manager Gary Brazil said the result was something the former European champions could build on.

“This football club should be playing against the Arsenals of this world, and they should be beating them,” he added. “These fans deserve to be watching Premier League teams and that’s what we’ve got to drive towards.”

West Ham had goalkeeper Joe Hart to thank for keeping them in the Cup with a 0-0 draw after an uninspired performance against Shrewsbury Town of the third tier.

The England goalkeeper, returning to the club where he started his career, made a fine save from Mat Sadler with about 10 minutes to go until the interval and repeated the trick against Alex Rodman.

“The players are a little bit deflated almost,” said Shrewsbury Town manager Paul Hurst. “But we have a replay to look forward to. We know it will be tough. They will be at home, more comfortable in their own stadium.”

At Wembley, Harry Kane broke the deadlock against AFC Wimbledon with just under half an hour to go before Kane again and Jan Vertonghen made it 3-0 to put the game beyond the reach of the visitors.