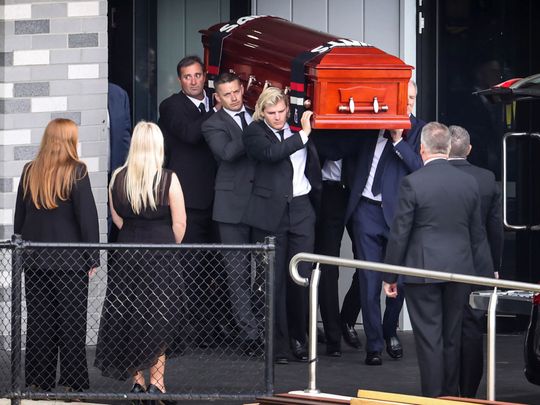 Australian cricket star Shane Warne was farewelled in a private memorial service among his close friends and family in Melbourne. The services took place with 100 high-profile names including cricket icons, his children, and parents at St Kilda Football Club to remember and celebrate the leg-spin icon. The private services ended with Warne’s final lap around Moorabbin Oval which was the home ground of his beloved Australian Football League, The Saints.

‘Fix You’ by Coldplay echoed through the stadium as the mourners gathered for the last services. Some of the main guests include former wicketkeeper Ian Healy, former Test captain Mark Taylor, the great batter Mark Waugh. His close friends were also present including former fast bowler Brendon Julian, Glenn McGrath, Michael Clarke, and more. Among the list of mourners, former St Kilda player Steven Baker and club president Andrew Bassat were also present. Australian TV presenter and journalist, Eddie McGuire hosted the funeral and delivered opening tributes. Eddie said. “The reason why he was so loved is because he was fallible, he was Superman. You threw the ball to Warne, you sat in that Southern Stand and he did the things you dreamt of doing as a kid.”

Warne’s former fiancé, Elizabeth Hurley wrote on her Instagram post, “My heart aches that I can’t be in Australia tomorrow for Shane’s funeral.”

There just isn’t any bowler in the world who can step into the shoes as the rightful heir of this leg-spin wonder! Do you agree?