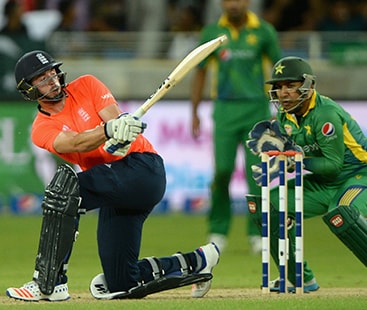 Chasing a target of 174 runs, England lost Duckett early but Vince and Root got the hosts back on track. Then, Root and Morgan stitched a 65-run stand, which almost laid the platform for the win.In the end, Denly s cameo 20 from 12 balls crushed any little hopes Pakistan had after Root s wicket.

Captain Morgan s form will be the key for England come the World Cup. His knock of 57 from 29 balls included 5 fours and 3 sixes and he got his form back.

Earlier, Babar Azam and Haris Sohail shared a century as Pakistan made a challenging total of 173 for six in their lone Twenty20 international against England. Both batsmen struck fifties, Babar top-scoring with 65 and Haris 50 exactly with the duo combining well in a third-wicket stand of 103 in 64 balls after Pakistan captain Sarfraz Ahmed won the toss and opted to bat first despite being confronted with a green-tinged pitch at Sophia Gardens.

Jofra Archer took a wicket in his first over as a Twenty20 international bowler, having made his England one-day international debut just two days earlier in a four-wicket win away to Ireland. The Barbados-born fast bowler, led England s attack with two for 29 in his maximum four overs.

Pakistan lost Fakhar Zaman for seven when a drive off Tom Curran was well held at cover by England captain Eoin Morgan, who took a catch above his head.

Archer, whose variations posed problems for Pakistan, reduced the tourists to 31 for two in the fifth over when a rising delivery rapped Imam-ul-Haq (seven) on the gloves to give wicket-keeper Ben Foakes a comfortable catch.

Babar and Haris then rebuilt the innings with some well-judged aggression, with Haris hitting the first six of the innings off Chris Jordan.  Babar then struck successive sixes off spinner Joe Denly to complete a 31-ball fifty. Pakistan then saw both their well-set batsmen fall in quick succession, Archer removing Haris before he ran out Babar. But they still managed to score 18 runs from a last over bowled by Jordan.