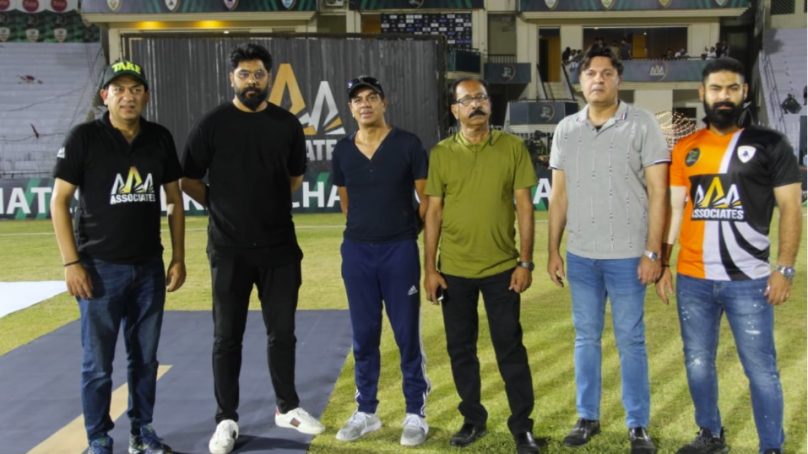 Islamabad:- Markhor’s first Tap ball Cricket champion league has been started in Jinnah Stadium Gujranwala. AAA Associates, Leading group of Companies, Chairman Shaikh Fawad Bashir inaugurated the ceremony as lead sponsor of the tournament. The Inauguration ceremony includes cultural performances by the local singers. The Renowned Celebrity Mr. Moammar Rana has been representing the league as a brand ambassador and it is powered by CrickSlab with GEO Sports as an exclusive Media partner. The winning team will be given a prize of Rs. 3 million and the runner-up team will be awarded Rs. 1 million. On an inaugural day, 2 matches concluded, 1st match was held between Roaring Lions and Eagle Eye in which later won the match with 4 wickets and the second match was held between Striking Panther and Rising Zebra in this former won with 7 runs.

Under the endorsement of the Punjab sports Ministry, Eight Teams with eight mentors will participate in this league in which each team will have one icon player along with 14 local players to enter into nail-biting fears competitions of 29 matches series starting from 26th June till 30 June 2021. The aim is to provide a platform to 120 emerging players to showcase their talent and skills under the mentorship of Pakistan’s best former cricket players like Aamir Sohail, Umar Gul, Rana Naveed, Imran Nazir, Shabbir Ahmed, Riaz Afridi, Yasir Hameed, Mukhtar Ahmed, and Hasan Raza. The competition will take place between Eight local Cricket clubs/Franchises named Charging Leopard, Eagle eye, Mighty Rhino, Rising Zebras, Mountain Roaring Lions, Striking Panthers, Racing Bulls, MCC KPK Tigers for clinching the Markhor trophy.

The Markhor Champion league was an initiative of Former Pakistani Test Cricketer Mr. Muhammad Khalil CEO of Markhor Champion League. He is also President of Tennis Ball cricket Association of Pakistan supported by Former Test Cricketer Mr. Abdur Rehman Managing Director and Chief organizer of Markhor champion League. The league has been designed to promote underprivileged talent at the grass-root level to represent Pakistan at National and International cricket competitions. The tournament is praised by Mr. Rai Taimoor Khan Bhatti Punjab Sports Minister with remarks “ Markhor Champion League is an exemplary initiative which promotes and encourage our youth towards healthy activities. Punjab Government fully supports these kinds of events so that raw talent from underprivileged areas comes forward to represent Pakistan at national cricket tournaments”.

AAA Chairman Mr. Shiekh Fawad Bashir appreciated this partnership by stating “We are established with an aim to bring best out of our young talent by providing them opportunities to polish their skills and demonstrate their talent in Technology, Sports, Business and social development activities. This way they can better represent Pakistan in national and international arenas. We are proud to sponsor this 2nd most prestigious Cricket league after PSL to bring our talent stars to national level sports events ”.

AAA associates have been very supportive in facilitating Sports-related activity across Pakistan by sponsoring and organizing competitions that encourage a healthy environment. Recently, they have organized the First Night Golf tournament in twin city to promote Golf sports among the local community.

It’s a win for Multan Sultan in HBL PSL 6