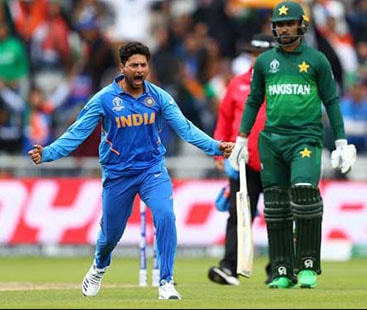 Pakistan were left facing an early World Cup exit after they flopped miserably against arch-rivals India here at Old Trafford on Sunday in a rain-affected encounter.

Put into bat in a stop-start, rain-hit match, India posted a commanding 336-5, with Rohit Sharma (140) smashing his second century of the tournament.

Fakhar Zaman and Babar Azam kept alive Pakistan’s hopes for a while in the chase but losing four wickets in an 18-ball span effectively derailed their hopes.

Set a revised target of 302 in 40 overs, Pakistan eventually finished on 212-6 and slumped to their third defeat in five matches. India moved up to third in the World Cup standings on seven points, while Pakistan are second from bottom on three.

Amir dismissed Hardik Pandya and Mahendra Singh Dhoni in quick succession. Kohli made 77 before Amir dismissed him after a rain interruption.

Amir (3-47) was pick of the Pakistani bowlers again, his immaculate ‘death overs’ denying India a 350-plus total.

India did not have to wait long for a breakthrough when Pakistan began their chase and it came in eventful manner.

Bhuvneshwar Kumar hobbled off the ground midway through his third over after landing awkwardly and Vijay Shankar was called to complete the over.

The pace bowling all-rounder responded by trapping Imam-ul-Haq lbw with his first delivery to mark a memorable World Cup debut.

The left-right combination of Zaman (62) and Azam (48) steadied the innings with a century stand before Kuldeep Yadav dismissed both the well-set batsmen to trigger a collapse.

The senior trio of Shoaib Malik (0), Mohammad Hafeez (9) and captain Sarfraz Ahmed (12) could contribute just 19 runs towards the team’s cause as Pakistan. Fakhar (62 from 75 balls) and Babar (48 from 57 balls) were the only Pakistani batsmen who managed to resist the Indian onslaught

For Pakistan even the gentle medium pace of Vijay Shankar (2-22) was too hot to handle. But it was spinner Kuldeep Yadav who did the most damage as he scalped both Fakhar and Babar to finish with figures of 2-32. Hardik Pandya took 2-40, cleaning up the senior duo of Hafeez and Malik.

Pakistan decided to put India into bat. They had belief in the in-form Mohammad Amir. They probably thought that the absence of big-hitting opener Shikhar Dhawan would give ample opportunity to their pace attack to pierce through the potent Indian top order in overcast conditions.

But it turned out to be a case of wishful thinking. Filling in for the injured Dhawan, KL Rahul provided the perfect support Rohit Sharma, who played the lead role in a partnership that laid the foundation of a big Indian total.

Amir was the only reason that kept Ind’a scoring rate in check in the first powerplay. The left-armer, who once again shot to the top slot on the highest wicket-takers of the tournament table, was at his brilliant best. He bowled to a perfect line and length, keeping both Sharma and Rahul at bay. But even as Amir kept creating pressure from end, Hasan Ali would allow India to lift it at the other.

Amir, meanwhile, was warned twice for running on the wicket in his follow through.

Pakistan came close to getting rid of the dangerous Sharma twice in quick succession. But first, it was Fakhar Zaman, who failed to run him out after targeting his throw at the wrong end. Later, Shadab Khan misdirected his throw from less 20 yards to allow another reprieve to Sharma.

Sharma obliged by smashing his second ton of the tournament. In the process, he hit the fastest fifty of his ODI career (34 balls) and played the lead role in a 136-run stand. Rahul played his role to perfect in a 78-ball 57 that included three fours and two sixes. When he finally fell to Wahab Riaz, India were already on course of a big total.

Rahul’s exit brought in Virat Kohli to the delight of a packed crowd dominated by Indian fans. The Indian captain allowed Sharma to continue playing the lead role as the two put on 98 runs for the second wicket. Both Sharma and Kohli kept punishing a series of bad deliveries bowled by the Pakistanis. Shadab, who came in for Shaheen Shah Afridi, was belted for 17 in his first over. Hasan was punished with disdain. There was some consolation for the pacer when he accounted for Sharma, whose 140 from 113 balls was the main highlight of the Indian innings. Amir spoiled India’s plan to target 350-plus as he took the wickets of Hardik Pandya, MS Dhoni and Virat Kohli in quick succession to take his tournament tally to 13 wickets with 3-47. Kohli entertained the fans with a delightful 77 from 65 balls that included seven fours

Pakistan unlikely to make it to World Cup 2019 semifinal