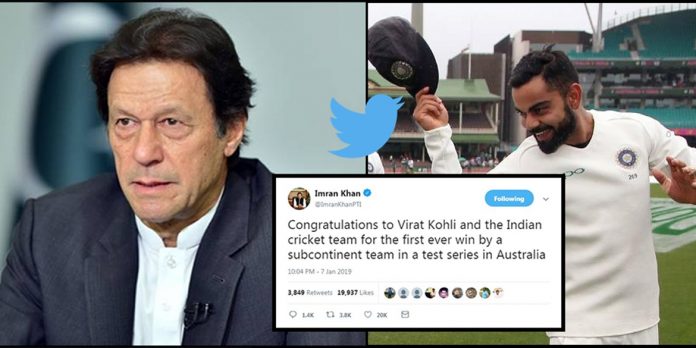 Khan took to Twitter to congratulate Kohli and his men following their 2-1 series win against Australia,

“Congratulations to Virat Kohli and the Indian cricket team for the first ever win by a subcontinent team in a test series in Australia,” former cricketer wrote on his official Twitter handle.

Former Pakistan fast bowler Shoaib Akhtar also come up with a congratulatory message. He praised Indian team on creating history in the Test-series.

Talking to Twitter, Akhtar wrote, “Congratulations to Team India for a historic series victory Down Under. One of the toughest tours in world cricket is a Test Series in Australia. It was a great effort and they kept Aussies under pressure throughout. #DownUnder #INDvAUS.”

On Monday, India reinforced their status as the world’s number one team by winning a historic first-ever series in Australia after play in the final Sydney Test was abandoned due to rain.

This is the first time that India have managed the feat since they began touring Australia in 1947-48.