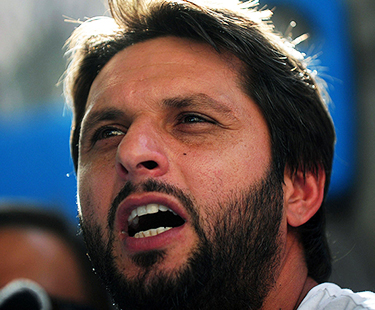 On Thursday, Former cricket team captain Shahid Khan Afridi said if he became the Prime Minister he would address the issues of unemployment and education.

Upon answering to a question of a journalist who asked him about his plans if made the prime minister of Pakistan for 10 days during a ceremony held as part of a nation-wide campaign launched by him titled “Taleem Ho Gi Aam, Her Beti Key Naam”.

On Thursday while addressing the ceremony, he said that women were giving birth to children on streets in Sindh, adding that this is 21st century Pakistan where human beings and animals are forced to drink water from the same place.

He said he needs support from the youngsters.

He added that Pakistan is stuck in a swamp of problems. People have to unite and make it an ideal country.

“More than 20 million children are missing out on education and the goal is to bring them to school,” Afridi said.

“Our culture and religion are very beautiful,” he said and added loving humanity is the greatest degree.