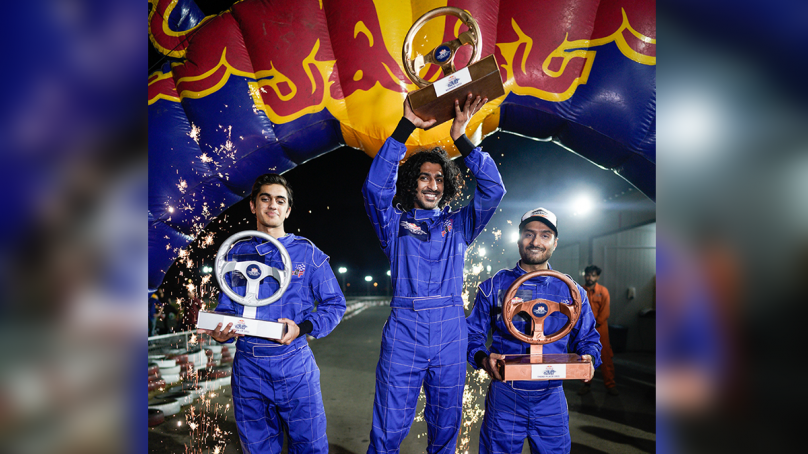 KARACHI, August 30th, 2021: Lahore – based professional drifter Talha Bin Azhar calls it a day with a splendid victory in the second edition of Red Bull Kart Fight. The first and second runner-ups – Shayaan Aman from Islamabad and Saad Lari from Karachi – gave him a close run during the finals at the 2F2F racing circuit in Lahore on Sunday.

The palatial venue gave Red Bull Kart Fight a breath of fresh air this year. The event went through the roof with a turnout like never before, attracting more than one thousand racers from across the country, including Karachi.

The national tournament took place to hunt the finest kart racing talent in the country that gets to play in the big leagues. The search continued from July 17th till August 22ndat the 2F2F Formula Karting in Lahore and Islamabad and the OMNI Track in Karachi.

Three racers each from Islamabad, Lahore, and Karachi made it through the national finals, where the fastest kart racers went toe-to-toe against each other in the 10-lap final race for the title. Azhar, who just got his feet wet at the event, stood victorious after a neck-to-neck battle against Aman, who finished third in the last season. The debutant Lari followed the top two to finish in third place.

“This was my first experience with this event and the Karting in Pakistan. I am impressed by the level of competition. The finals had the best drivers from all cities who gave me a tough time, especially Aman. He was constantly chasing my tail, and I had to attack and defend myself psychologically on every turn to keep myself ahead,” said Azhar, the Professional drifter of Pakistan.

Meanwhile, the runner-up Aman admitted to facing stiff competition from his opponent. “Talha was tough competition on the track. I tried my level best to keep up but Talha proved to be better and won the race.”

The 2021 edition witnessed more than 1000 racers across all participating cities. Karachi alone brought a record 700+ racers to the track to push the pedal and test their limits to qualify for the final, offering a glimpse into the enormous underground karting scene in the metropolis.