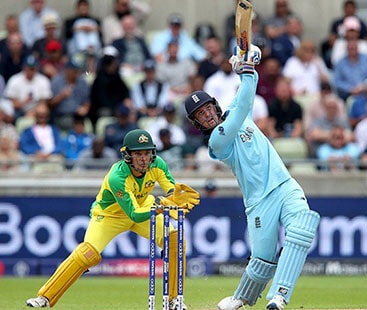 England booked their place in the World Cup final against New Zealand with a dominant eight-wicket win over reigning champions Australia at Edgbaston on Thursday.

Jason Roy hit a blistering 85 as England reached a victory target of 224 with a mammoth 107 balls to spare after restricting Australia.

Openers Roy and Jonny Bairstow (34) put on 124 for the first wicket, their fourth consecutive century stand

Roy, who missed three matches earlier in the tournament with a torn hamstring, was in particularly good form, hitting left-arm fast bowler Mitchell Starc and Nathan Lyon for sixes.

Australia were in desperate need of early wickets after suffering a top-order collapse on the way to being dismissed for 223, with the record five-time champions thankful for Steve Smith’s battling 85.

All three of England’s defeats this tournament — including a 64-run grou- stage loss to Australia — have come batting second but Roy and Bairstow showed few signs of nerves in Birmingham.

Australia captain Aaron Finch turned to Steve Smith’s occasional leg-spin in a desperate bid to break the partnership.
this Australia side on the best ground in the world is amazing.”

Australia’s prolific opening pair of David Warner and Finch, as well as Peter Handscomb, were all back in the pavilion by the seventh over.

Warner, who like Smith walked out to boos because of his role in the ball-tampering scandal, returned to even louder cat-calls after being dismissed for nine.

Smith and Alex Carey steadied the innings with a fourth-wicket stand of 103 but wickets tumbled at regular intervals and Australia were unable to set England a testing target.

Chris Woakes saluted England’s “incredible” eight-wicket demolition of Australia as the hosts swaggered into their first World Cup final since 1992.

Woakes won the man-of-the-match award at Edgbaston after taking 3-20 in a lethal eight-over spell that included the key wicket of opener David Warner.