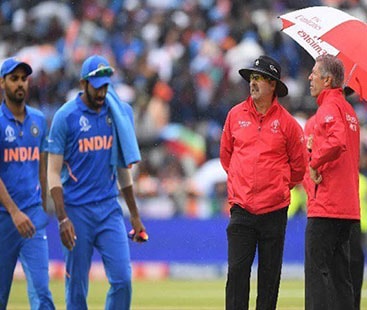 The opening Cricket World Cup semi-final between India and New Zealand will be played over two days after rain at Old Trafford prevented the match finishing as scheduled on Tuesday.

But after more than four hours off the field, the umpires eventually decided there was no prospect of even a 20 overs per side match — the minimum required under the Duckworth-Lewis method for rain-affected matches — being completed on Tuesday and they abandoned play for the day at 6:20 pm (1720 GMT).

The match, which remains a 50 overs per side contest, will now resume at 10:30 am (0930 GMT), weather permitting, with New Zealand on what will be their overnight score of 211-5, with Ross Taylor 67 not out and Tom Latham unbeaten on three.

If a 20 overs per side match cannot be completed on Wednesday as well, India would go through to Sunday s final at Lord s on the basis of having finished first to New Zealand s fourth in the 10-team group stage.