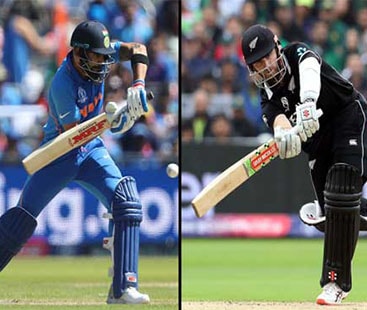 India topped the group stage with seven wins from nine matches, while New Zealand limped into the last four after three successive defeats.

After making a fast start to the tournament, the Black Caps lost their last three round-robin games and qualified for the semi-finals in fourth place to set up a clash with the top-ranked Indians in Manchester.

They are heavy underdogs to get to their second successive final but Vettori said anything was possible if New Zealand hit the ground running.

“A three-match losing streak can evaporate pretty quickly with a great 10 overs at the start,” Vettori wrote in his International Cricket Council column.

“If New Zealand get off to a great start, with bat or ball, the streak will soon be forgotten.”

Vettori said that out-of-form opening batsman Martin Guptill, who has scored just 166 runs in eight innings, was key to that game plan on the batting side.

“He has done it before so many times, and knowing him as I do, I am sure he can turn it around again and very quickly it will become a different story,” he added.

On the other hand Sachin Tendulkar may have unwittingly provided New Zealand with extra motivation to cause a huge upset in Tuesday’s World Cup semi-final against India when he wished MS Dhoni happy birthday and “all the very best for the next two games”.

The implication of the retired batting great’s remarks was that India wicketkeeper Dhoni, who turned 38 on Sunday, and his team-mates already have one foot in the July 14 final at Lord’s against England or Australia.

India, whose group match against 2015 runners-up New Zealand was washed out, have suffered just one defeat at this World Cup so far, against England, and ended on top of the 10-team group stage, making them strong favourites to beat the Black Caps.