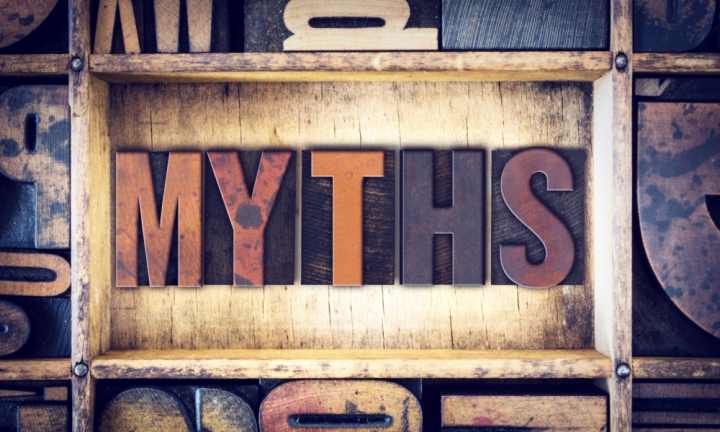 Seems like every time technology evolves and blows our minds, some naysayer comes along to warn about an innovation’s dangers.

Fortunately for us, many of those warnings come from Luddites and are typically misguided or often just flat-out wrong.

We’ve broken down some of the most widespread myths — about cutting edge tech, as well as devices that have been around for a while. Doesn’t it feel nice not to fear the “tech”?

Myth: You can’t take good photos unless your camera has a lot of megapixels.

Truth: Despite being one of the most commonly held beliefs about digital photography, a photo’s quality is determined by many more factors than megapixels. As The New York Times explains, “a camera’s lens, circuitry and sensor — not to mention your mastery of lighting, composition and the camera’s controls — are far more important factors.”

Myth: Using a cellphone at a gas station is a fire risk.

Truth: Only one gas station fire has reportedly involved a cell phone, and even in that case it was later found that the phone wasn’t responsible for actually starting the fire, New York Daily News reports. Several studies have also debunked the long-time myth that cellphones might generate an electric spark that could ignite gasoline fumes. That’s theoretically possible, the FCC says, however highly improbably under normal circumstances. Still, just to play it safe the National Fire Protection Association advises that you follow manufacturer’s instructions, which may say that you should leave your phone in the car. The FCC calls the potential for fires caused by wireless devices “very remote.”

Myth: The world wide web and the Internet are the same thing.

Truth: They aren’t the same thing. The Internet is the infrastructure that allows information to be shared between networks across the world, including ones accessed via personal computers, smartphones, various kinds of software and more. The web is just another one of those networks, namely the one with sites and pages that start with www. Hey, just like the one you’re on right now! Look at that!

Myth: If you don’t fully drain and recharge your phone and laptop batteries, they’ll lose the ability to take a full charge.

Truth: This may have once been true, but advances in battery technology have made this far less of an issue. Now most devices are powered using lithium-ion or lithium-ion polymer cells, which, as Apple notes, you can charge “whenever convenient, without requiring a full charge or discharge cycle.”

Myth: Magnets will erase your data.

Truth: You’d need a really big magnet, and even then it would only affect certain types of data storage. Solid state drives (SSD) such as thumb drives, for example, are safe. Hard disk drives, like those on your computer, are at risk but only from really powerful magnets, like those used in MRI machines or other specialized equipment.

Unless you’re a meth dealer, you probably wouldn’t want to go out of your way to expose your data to a giant magnet.

Myth: Standing next to the microwave is bad for you.

Truth: While microwave ovens do at times leak some amount of radiation, it’s usually nowhere near enough to do any real harm, The New York Times reports. In fact, the FDA puts limits on the amount of microwaves radiation that can leak from an appliance over its lifetime to one “far below the level known to harm people.”

Standing IN the microwave, however, is a different matter entirely.

Myth: You should never, ever put metal in the microwave.

Truth: Putting metal objects in the microwave can be dangerous, but it’s not as harmful as you’ve been led to believe. Rather than quantity, the safety of putting metal in the microwave depends more on shape. Sharp edges can conduct electrons that result in sparking, but items with more rounded metal surfaces, such as spoons, usually don’t cause problems.

Truth: Despite being one of the most talked about health scares in the 1990s and early 2000s, no research to date has found a causal link between using your cell phone and getting cancer. An 11-year-long study in the UK concluded that “despite exhaustive research, we have found no evidence of risks to health from the radio waves produced by mobile phones or their base stations.”

Still, you might want to stay tuned on this one. The study also determined that “more research was needed.”

Truth: While video games have at times been blamed for kids’ bad behavior, science isn’t convinced. Looking at data spread over 10 years, a 2013 study from the University of Glasgow found consistently playing video games did not result in significantly altered behavior. In fact, a separate study found that kids who played video games for less than an hour a day were a bit happier and more well-adjusted than kids who didn’t play at all.

Still, other studies have found that playing video games excessively can have negative results, particularly when a game is especially hard.

Still, all things in moderation.

Truth: The legalese found in a once-commonly shared “disclaimer” that purported to allow users to keep all the rights over the photos they shared on Facebook, probably won’t stand up in a real court of law. Agreeing to Facebook’s terms of use means that while you technically own the photos, Facebook has the right to use your photos in a variety of ways depending on how you set your privacy settings. As one property lawyer put it, “you own it, they have a license to use it.”