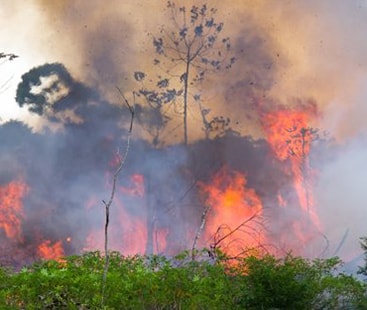 A NASA satellite captured harrowing images of carbon monoxide in the atmosphere due to the wildfires that continue to rage in the Amazon rainforest.

NASA collected new data from their Atmospheric Infrared Sounder (AIRS) instrument, measuring levels of carbon monoxide at an altitude of 18,000 feet (5,500 meters) from August 8 to 22, according to a press release.

The AIRS, which is aboard NASA’s Aqua satellite, measures “atmospheric temperature and humidity, cloud amounts and heights, greenhouse gas concentrations and many other atmospheric phenomena,” the press release stated.

This animation of the new data shows carbon monoxide rising into the atmosphere, indicated by colours green, yellow, and dark red to demonstrate the concentration of the gas by parts per billion by volume (ppvb).

Green indicates concentrations of carbon monoxide at approximately 100 parts per billion by volume (ppbv); yellow, at about 120 ppbv; and dark red, at about 160 ppbv,” NASA wrote in the press release. “Local values can be significantly higher.”

As an air pollutant that can travel long distances and stay in the atmosphere for about a month, carbon monoxide plays a significant role in climate change.

While the AIRS evaluated carbon monoxide at a relatively high altitude and has little effect on the air we breathe as of right now, “strong winds can carry it downward to where it can significantly impact air quality,” NASA wrote in the press release.

Concern for the world’s largest rainforest arose as a record number of wildfires blazed through the Amazon this year – a total of 72,843 incidents, according to Brazil’s National Institute for Space Research (INPE).

The fires were reportedly caused by humans. Brazilian president Jair Bolsonaro has encouraged the development of the rainforest for mining, logging, and farming.