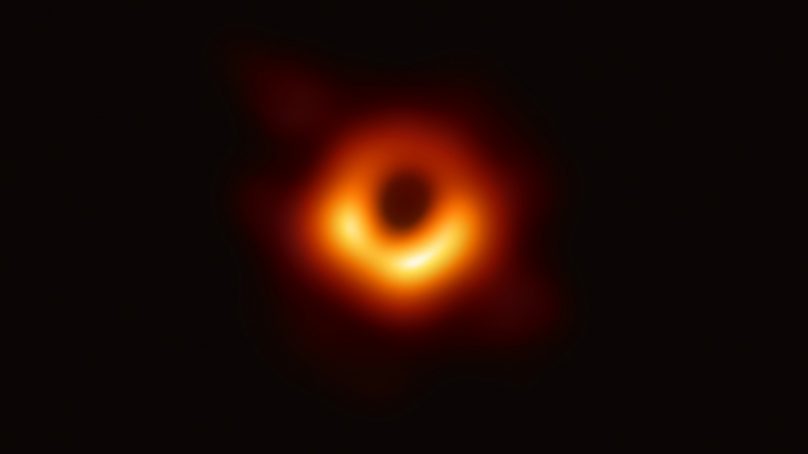 Astronomers have taken the first ever image of a black hole, which is located in a distant galaxy.

It measures 40 billion km across – three million times the size of the Earth – and has been described by scientists as “a monster”.

The black hole is 500 million trillion km away and was photographed by a network of eight telescopes across the world.

Details have been published in Astrophysical Journal Letters.

The image reveals the black hole at the center of Messier 87, a massive galaxy in the nearby Virgo galaxy cluster. This black hole resides 55 million light-years from Earth and has a mass 6.5 billion times that of the Sun.

“We have taken the first picture of a black hole,” said EHT project director Sheperd S. Doeleman of the Center for Astrophysics.

“This is an extraordinary scientific feat accomplished by a team of more than 200 researchers.”

Black holes are extraordinary cosmic objects with enormous masses but extremely compact sizes. The presence of these objects affects their environment in extreme ways, warping spacetime and super-heating any surrounding material.

The image shows an intensely bright “ring of fire”, as Prof Falcke describes it, surrounding a perfectly circular dark hole. The bright halo is caused by superheated gas falling into the hole. The light is brighter than all the billions of other stars in the galaxy combined – which is why it can be seen at such distance from Earth.

The edge of the dark circle at the centre is the point at which the gas enters the black hole, which is an object that has such a large gravitational pull, not even light can escape.

“Although they are relatively simple objects, black holes raise some of the most complex questions about the nature of space and time, and ultimately of our existence,” he said.

“It is remarkable that the image we observe is so similar to that which we obtain from our theoretical calculations. So far, it looks like Einstein is correct once again.”

Having the first image will enable researchers to learn more about these mysterious objects. They will be keen to look out for ways in which the black hole departs from what’s expected in physics. No-one really knows how the bright ring around the hole is created. Even more intriguing is the question of what happens when an object falls into a black hole.

The Woman Who Made It Possible

Katie Bouman, an MIT grad, helped develop a computer program while still in school. Along with others, it helped create the image of the black hole. She also led testing to verify the images. 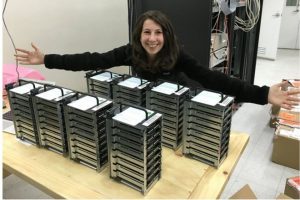 Part of what’s made her popular are two photos that spread across social media. In one photo from the BBC, Bouman is standing next to a table stacked with hard drives of data. Some people remarked that the photo is reminiscent of an iconic 1969 image of Margaret Hamilton with the printout of the Apollo guidance software code she and her team developed.

3 years ago MIT grad student Katie Bouman led the creation of a new algorithm to produce the first-ever image of a black hole.

Today, that image was released.

Congratulations to Katie Bouman to whom we owe the first photograph of a black hole ever. Not seeing her name circulate nearly enough in the press.

Amazing work. And here’s to more women in science (getting their credit and being remembered in history) 💥🔥☄️ pic.twitter.com/wcPhB6E5qK

Bouman delivered a TED talk in 2016 called “How to take a picture of a black hole,” where she explained “getting this first picture will come down to an international team of scientists, an Earth-sized telescope and an algorithm that puts together the final picture.”

Why are there companies that are abandoning social networks?