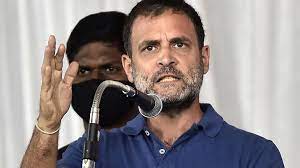 The leader of India’s main opposition party, Rahul Gandhi took a dig on Twitter for blocking his tweets. The tweets were about a nine-year-old girl who was raped in murdered. Gandhi called it partisan politics played by the platform.

Gandhi’s account that has 19.5 million followers was blocked when he posted a photo of himself with the victim’s parents who were allegedly raped and killed in New Delhi. Gandhi said that by blocking him, Twitter is intervening in the political issues played by the Modi government.